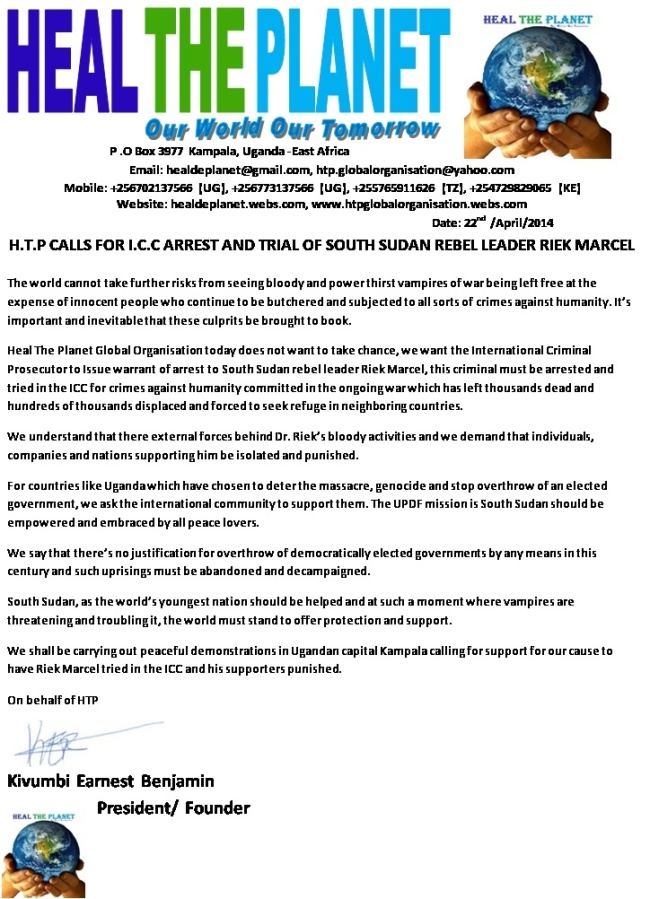 The world cannot take further risks from seeing bloody and power thirst vampires of war being left free at the expense of innocent people who continue to be butchered and subjected to all sorts of crimes against humanity. It’s important and inevitable that these culprits be brought to book.

Heal The Planet Global Organisation today does not want to take chance, we want the International Criminal Prosecutor to Issue warrant of arrest to South Sudan rebel leader Riek Marcel, this criminal must be arrested and tried in the ICC for crimes against humanity committed in the ongoing war which has left thousands dead and hundreds of thousands displaced and forced to seek refuge in neighboring countries.

We understand that there external forces behind Dr. Riek’s bloody activities and we demand that individuals, companies and nations supporting him be isolated and punished.

For countries like Uganda which have chosen to deter the massacre, genocide and stop overthrow of an elected government, we ask the international community to support them. The UPDF mission is South Sudan should be empowered and embraced by all peace lovers.

We say that there’s no justification for overthrow of democratically elected governments by any means in this century and such uprisings must be abandoned and decampaigned.

South Sudan, as the world’s youngest nation should be helped and at such a moment where vampires are threatening and troubling it, the world must stand to offer protection and support.

We shall be carrying out peaceful demonstrations in Ugandan capital Kampala calling for support for our cause to have Riek Marcel tried in the ICC and his supporters punished.

On behalf of HTP

His Wounds were 4 Our Redemption, His sorrow brought us joy. His suffering guaranteed us salvation. By His Strips we are healed, In His death came life to us, His Resurrection gave us hope. On behalf of HTP & HICGI I wish you happy Easter Holidays.
E .K Benjamin
http://www.haveitcheap.com
http://www.healdeplanet.webs.com 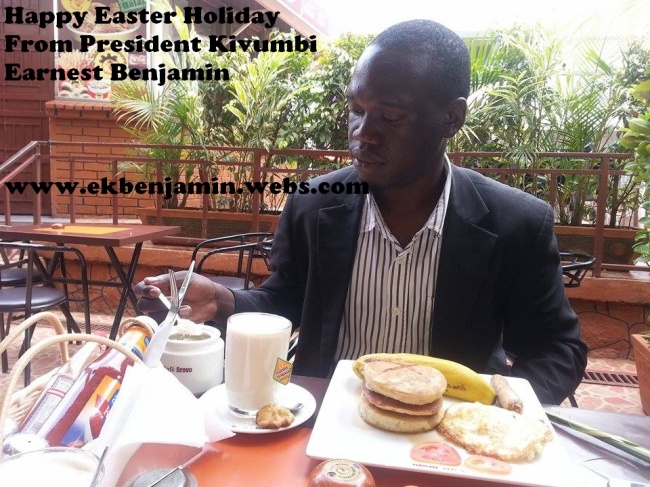 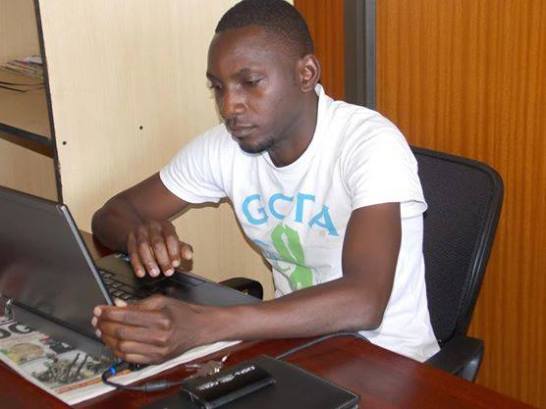 Veteran Journalist Daniel Tatya has redefined Kivumbi contribution to Uganda’s development. A journalist who first gave me media publicity when I was in high school at the age of 13 years a decade latter looks through my life and achievements in politics, social and economic contribution to Uganda and Africa.

This afternoon in a media conversation Tatya Daniel who is now a Sports Editor with The Investigator News  Magazine but has worked for multiple news Companies like The Sunrise says “Kati you are a big man shaking and setting trends in the country economically, politically and socially sir. Very hard working young man…“

In my response on this I just have to say that; Am so humbled, you know Hussein Barack Obama has attributes to a number of journalists who gave him platform and made him what he is, similarly I see and sight people like you who have not only given me platform but have helped to shape my character and define my dreams clearly-am grateful so grateful

In 2010 while the government machinery battled me in cells and court, Tatya had to say ” Does it mean police takes you for a wrong doer, they must respect you as a future president man.“ 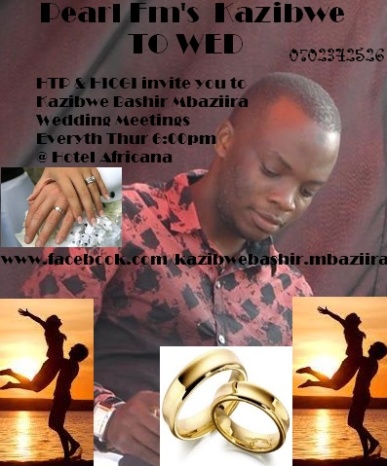 Kazibwe Bashir Mbaziira is a presenter of 107.9 Pearl Fm’s popular program The Inside Story that runs from 10:00am-12:00pm Every week day. He also does a similar program on Bukedde TV 2 from 9:00pm-10:00pm. Because of his outstanding incredible character and services to the coutry, Have It Cheap Group International-HICGI in Association with Heal The Planet Global Organisation-HTP are hereby taking keen interest in his planned wedding. We would like you to join him in support no matter where you are and if still you can to attend these wedding meetings going on at Hotel Africana every Thursday 6:00pm. You can still visit him at Pearl Fm’s station in Kampala.
“And Man Shall not Live Alone, So did God creator him a helper suitable for him from his ribs”
Mr. Kazibwe alongside his colleague Kalule Suleiman and Abdul Sam Ali Kinobe are celebrated for making Ugandans most knowledgeable in Africa with the daily credible, latest and historical events and stories happening around the world in depth analysis. 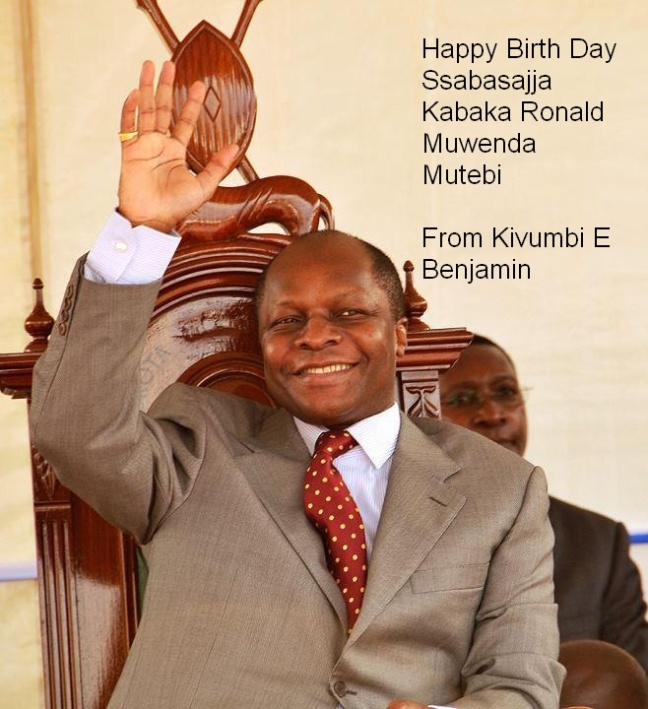 Kivumbi on Mission in Rakai for Sr. Amadeo Charity Foundation

E K Benjamin also known as Kivumbi Earnest Benjamin will tonight be leaving for Kampala from Rakai 125 Miles West of the Ugandan Capital on Tanzania-Uganda Boarder where he has spent 3 days on a special mission by Sister Amadeo Charity Foundation.

Kivumbi has been meeting with district leaders right from L.C I,II, III, CDO, CAO to RDC and many others. Together with Board officials of the organisation, we have donated food items including sugar and rice to more than100 families in Kakuuto sub-county. We have met hundreds of orphans,dozens of needy, elderies, PWDs, HIV/AIDS victims and other vulnerable groups who need support.

Sr. Amadeo Charity Foundation was founded by Grace Kabi, a Ugandan Norwegian who has great zeal in uplifting the standards of people in the area who are highly and deeply affected by HIV endemic. The Organisation will continue rendering services to the people including on a national level because of generous people like you who will sacrifice a penny to enable us take at least one or more children to school, feed  a family and treat a sick person as well as supporting the elderies.

Speaking to Norway this morning Kivumbi has expressed gratitude and humility  for undertaking the assignment given to him; this journey reminds him of the Trip he took in 2012 when he moved around East Africa passing from Rakai to Mutukula. Kivumbi visited Bukoba, Mwanza, Arusha, Mt. Kilimanjaro, gave a public lecture at the University of Dodoma-UDOM about the need to unite African nations,presented a paper in  Dar-el-salaam at the State House and continued to Nairobi where he also gave a public lecture at the University of Nairobi about his dream for a United States of Africa. Click on the link to see deatils of the story http://www.redpepper.co.ug/kivumbi-calls-for-a-united-africa-president/ .Kivumbi also campaigned for Orange for Democratic Change-ODC Parliamentary flag bearers but campaigned for President Uhuru Kenyata. The two month odyssey gave him outstanding charisma and experience for his political ambitions and business ventures as well as exposure.

The World Has Experienced Tragedies but the 1994 Rwanda Genocide can not  just depart from our memories, it becomes fresh every April of each year we commemorate this historical humanitarian catastrophe, Today we mark 20 years since close to 2 Million people were butchered as the world gazed. On behalf of Heal The Planet Global Organiation-HTP I apologize but it would sound much more if America, International Media, U.N and the International Community does so. I know this is not enough, but we need also to compensate Rwanda and must promise ourselves never to be silly like this again when one part of the world suffers. We thank Uganda for proving this too, sending UPDF troops to South Sudan to stop a Genocide as America shouts that the troops be withdrawn! RIP Rwandese who perished.  Kivumbi Earnest Benjamin HTP & HICGI Boss http://www.healdeplanet.webs.com http://www.htpglobalorganisation.webs.com  Click here to view 64 Tear splashing Images of Rwanda 1994 Genocide https://www.flickr.com/photos/presidentkivumbi/sets/72157643597266134/ 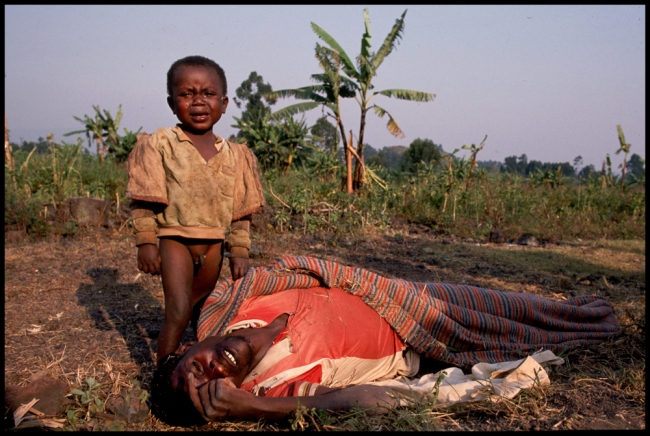 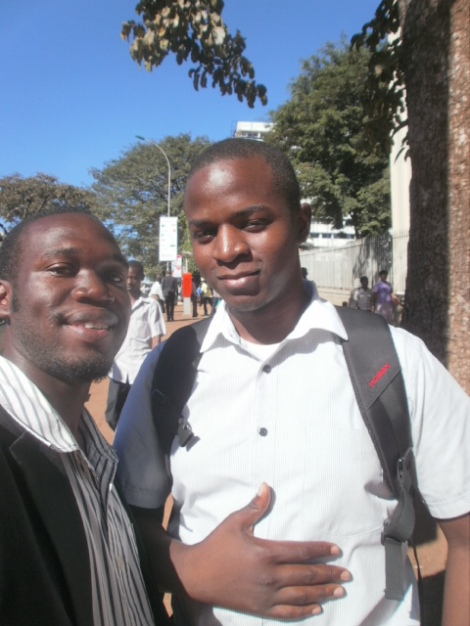 Today we bring you Desire a beautiful young rich woman from Munyonyo, a Kampala City High Profile Suburb. This lady is addicted to a Ugandan music celebrity Eddy Kenzo ; she asks to make love with him while on phone but what she doesn’t know is that the conversation is live on air on a Ugandan FM radio station 96 Beat FM.
After a serious debate on the subject, Heal The Planet Global Organisation-HTP Team decides to side with Desire, we agree that Desire is not wrong to ask to make love with a man she attracted to like Kenzo. We feel that just like men, women should also be given chance to approach men they desire and propose to them or even ask to make love with them-they too have feelings like men.
Enjoy this video edition in which we cover this radio broadcast in a video format and don’t forget to contribute to the discussion or even invite your colleagues to watch it. Share as much as you can by email and social media or even sms.
Yours truly
Kivumbi Earnest Benjamin
HTP President & Founder