Thanks you Jesus for the people who love me, now that I have gat this Gadget my presence, Influence, Power, Favor, Acceptance is ganna extend to the ends of the earth. Thanks so much this person who has surprised me with this super fast and multi function gadget.

This dawn we arrived back from Masaka where we went last night for the Acrobatic Mission Fellowship hosted by Pastor Mulungi Stephen at his new church in Nyendo. We were blessed to fellowship and pray together, for the spirit of AMF cannot easily be broken; this is the solidarity of them men and women who gather together in the homes of each member every Friday night no matter where the members is.  Were more than 90 families who subscribe to AMF. There’s an annual program that our Bishop Najja Nsubuga Musoke & Chairman Edward Ssemakula draw on which we have to move on. Since 2007 I have been brethren in this Fellowship-it’s not a secret society see details www.acrobaticmissionfellowship.webs.com and www.facebook.com/Acrobaticmissionfellowship. Thanks Mr. & Mrs Afayo Kayemba, Mr. & Mrs. Najja, Mrs. Mujizi Heather, Mrs. Ssebaduka, Harriet, Mr. Semakula and I Kivumbi Earnest Benjamin who travelled last night 120 km west of Kampala. Let’s keep the fire burning.

Sarah and the husband of Lungujja Progressive Schools, thanks for hosting us last Friday and all members who have been hosting us. 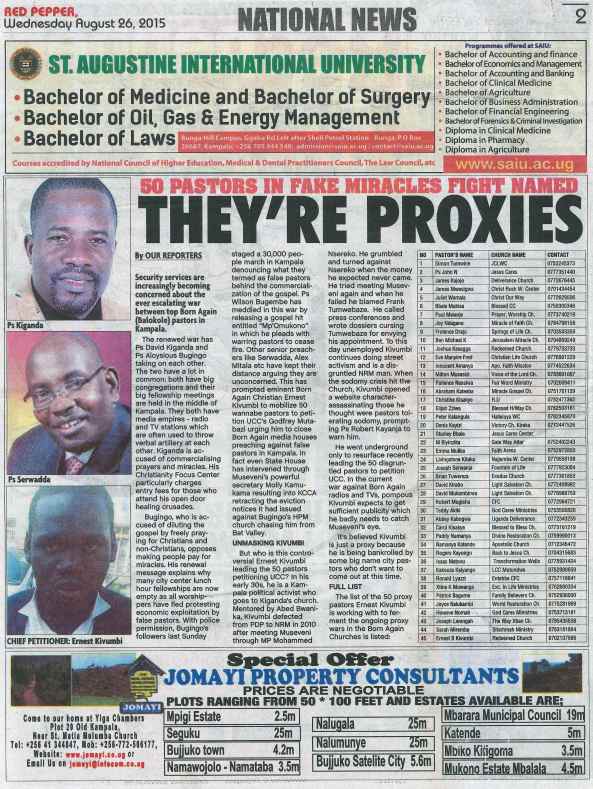 In his comment on the Publication today; Kivumbi Earnest Benjamin says there a few loopholes in the publication but its impressive to him and therefore he has no choice rather than embracing it.

Even Obama Was Anointed by Pastors-Kivumbi Receives full Blessings for Political Seat.

Not even the Russian President Vladimir Putin does it this style but at 7:00pm on the Monday of 29th June 2015 young politician spoke boldly on a live 2 hour radio talk show engulfed the citizens of Africa’s most powerful nation Uganda; Kivumbi Earnest Benjamin, 26 years- former Kampala Central MP Aspirant defends his president and National Resistance Movement (NRM) Government as more than 20 emotional callers engage him in a hot debate not forgetting his tough moderator.

His enthusiasm and audacity as well as eloquence help him articulate various issues on democracy, President Yoweri Kaguta Museveni’s 30 year reign, Government programs and score cards. The likes of Former Premier John Patrick Amama Mbabazi, Opposition Leader Dr Col Wallen Kizza Besigye Kifefe amongst others could miss a mention. According to a survey by HICGI more than 3 million people listened to the show including senior citizens and because of this heated debate, allow us code name it Defending My President-Kivumbi Talk show. Listen, Enjoy, Engage, Download and share with others.